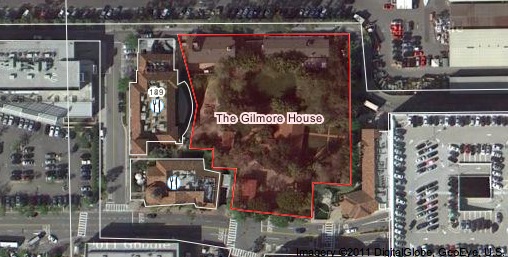 Jose Antonio Carrillo, one time "Alcalde" (Mayor) of Los Angeles, issued this land grant to Antonio Jose Rocha and Nemisio Dominguez (not from Rancho San Pedro). The building is also known as the Gilmore Adobe. The land grant included the La Brea Tar Pits. The building is a private office. The adobe building can be found inside the back parking lot and is encompassed by the Los Angeles Farmers Market.

In the 1870's, with a partner, Arthur Fremont Gilmore purchased two ranches in the Los Angeles vicinity. The purchase inaugurated a string of serendipitous events which not even the far-sighted Gilmore could predict. When Gilmore and his partner elected to dissolve their arrangement, they drew straws - Gilmore's straw secured 256 acres on which he created a successful dairy farm. A.F. Gilmore had no plans for a world-renowned institution when he moved to Los Angeles from Illinois in 1870. Rather, he was seeking a better life on the promising West Coast. When he married Mary Elizabeth Bell in 1882, the small adobe on the property became the new home for his family.

At the turn of the century, while drilling for water for his herd of dairy cows, A.F. Gilmore hit oil. By 1905, the dairy was gone and the Gilmore Oil Company born.

As Farmers Market at Gilmore Island became an international landmark, the property surrounding it grew famous with it. E.B. Gilmore, rarely missed an opportunity. Thus in the 1930s and '40s, he gave Angelenos the opportunity to experience livesporting events.

In 1934, a few months before Farmers Market opened, Gilmore built the first race car track designed specifically formidget car racers, a venue built of love and commercial savvy. Gilmore loved racers and his marketing sense led him to support them as a "demonstration" of Gilmore Oil products.

His romance with cars extended well beyond the construction of Gilmore Stadium. As a sponsor, E.B. Gilmore took vehicles to the Winner's Circle at the Indianapolis 500 in 1935 and 1937. As a patron, he helped establish a land speed recordwhich lasted for eight years. As a businessman, he created"Economy Runs" which evolved into modern stock car racing. In 1987, E.B. Gilmore was elected to the Indianapolis Motor Speedway Hall of Fame and in 1992, he was inducted into the Sprint Car Hall of Fame in Knoxville, Iowa.

Gilmore Stadium was also home to the Bulldogs, the first professional football team in Los Angeles. Art Aragon, the Golden Boy of boxing, fought in the 18,000 seat stadium. The site was also used for rodeos, wrestling matches and even swimming. This was also where presidential candidate Harry Truman delivered his famous "stiff upper lip" speech. No sooner had the Gilmore Stadium become a fixture in Los Angeles than E.B. Gilmore acted again. Gilmore Field was constructed in 1938 to accommodate the Hollywood Stars, a minor league professional baseball team of the Pacific Coast League, owned by Bing Crosby, Barbara Stanwyck, and Cecil B. DeMille.

Gilmore Field was perhaps the most intimate baseball venue ever created in a metropolitan area. Home plate was exactly 34 feet from the seats, first and third bases only 24 feet away. Gilmore Field taught a generation of Angelenos to love baseball. The Hollywood Stars popularity created the climate which helped persuade the owners of the Dodgers to move west, before the 1958 season.

In 1918, the next Gilmore generation assumed control of the property. Earl Bell Gilmore, Arthur's son, went on to create a vast oil and gas distribution network. The auto industry was producing more than four million cars each year. With a healthy portion of those headed for California and Los Angeles, Gilmore's independent oil company became the largest in the West.

Gilmore's flair for promotion made his gas stations a popular part of the Western landscape. "Blu-Green" gas, the famous "Red Lion", "Gas-a-terias" (the first self-serve stations), and radio jingles which people hummed, were examples of his successful promotions.

As a part of an expansion and reconstruction project in 1941, Farmers Market became the home of the Clock Tower, which has become an international landmark. In tribute to Earl B. Gilmore, Roger Dahlhjelm, and Fred Beck, the words "An Idea" were inscribed on the Clock Tower.

At the turn of the millennium, the one-time dairy farm adapted once again. Following years of careful planning, the A.F. Gilmore Company completed an arrangement to develop several acres of property into one of the most delightful, and amazingly popular, shopping and entertainment venues in the nation. The Grove, developed by Caruso Affiliated Holdings, features a wonderful array of stores, restaurants, the finest movie theater complex anywhere, and a streetscape which is inviting, friendly, and specifically designed for strolling. At the same time, the Gilmore Company createdNorth Market, now home to the ultra-modern Gilmore Bankbuilding, a number of street-level shops, and two stories of offices. While these new additions have greatly enhanced the experience, which draws millions of visitors to Farmers Market, the Market itself remains what it has always been – a delightful and utterly charming place to meet, eat, shop, and stroll.

(Much of this article was reprinted from the History of the Farmers Market website.)